In this brief article we are going to discuss the most common air Suspension issues that occur in the Jaguar X350,  what the causes are, and Troubleshooting Tips.

The Top 3 Air Suspension Issues in the X350 are:

What Suspension does the Jaguar X350 have?

The X350 came with an Air suspension system as standard on all 4 corners. The front suspension is a Double Wishbone with Air Springs and Anti-Roll Bar.

The Rear Suspension on the X350 is a Double Wishbone with Air Springs and Anti-Roll Bar.

The X350’s Automatic-lowering beyond a preset Speed is disabled when towing since the towing payload already pushes the rear suspension down. Only Jaguar-approved towing equipment can turn Off Automatic Lowering.

If, for any reason, the Suspension height sensors are either refitted or replaced, they will require calibration each time this happens.

Two versions of the air spring are available, comfort and sport. The sport version works at slightly higher spring rate as compared to the comfort version.

Each air springs version comes with its own version of dampers passive and active.

The fault happened because the Air compressor was not able to generate the required pressure within 2 min.

This could mean one of two possibilities: 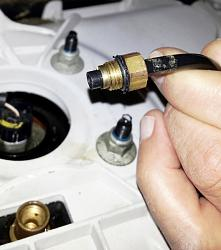 Hissing Noise in X350 when engine is running

In this brief article we have discussed the most common Air Suspension issues that occur in the Jaguar X350,  what the causes are, and Troubleshooting Tips.